This is what happens to postmen, couriers, delivery agents who don't delivery on time and those who think they can beat me on the games table, courtesy of my hairy hound Cai, those who have had the misfortune to meet him will understand, 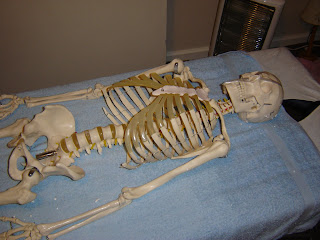 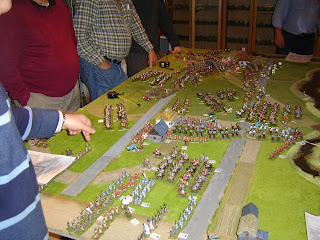 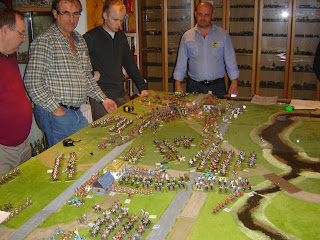 Mr Rogers, Dafydd, Matthew and birthday boy Gareth, apologies to Stuart, Craig, Shaun and the better looking Dafydd who all with due modesty avoided the camera 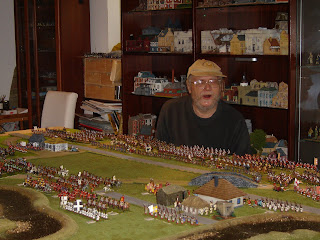 "Did I paint all these?" 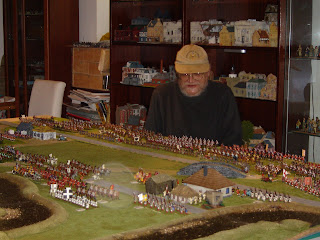 "Get stuck in Boys" 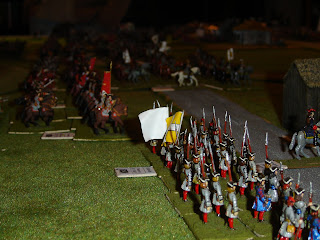 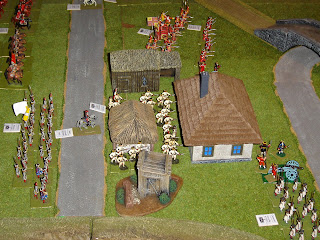 "good job there's a public loo in the village " 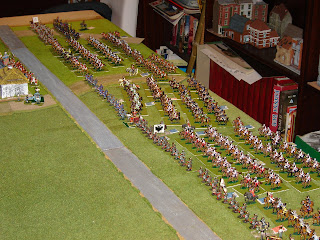 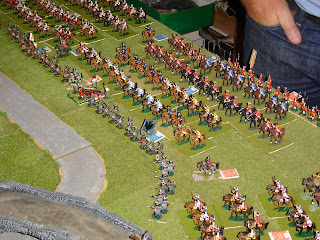 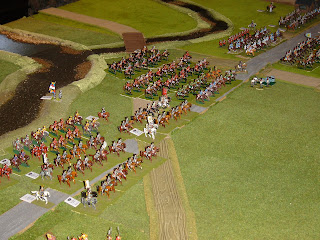 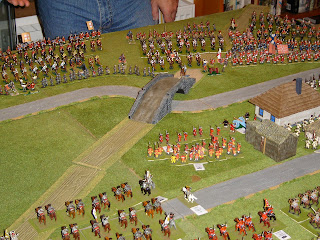 above Allied assault towards Blenheim 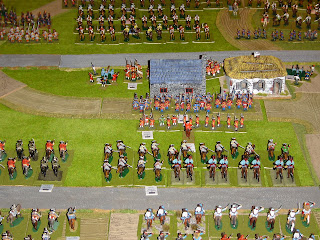 French cavalry move up in support 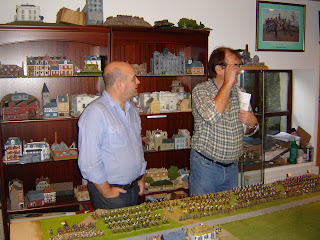 the Birthday Boy, hands in pocket, on right the shoulder biting Dafydd

May I wish all followers of this blog a Very Happy Xmas and a Figureful New Year , I trust you all found in your Santa's stockings the masses of figures, books, paints, terrain that you've always wanted, and I hope you all had a very peaceful Xmas.
I must apologise to those to whom I didn't send cards this year, my only excuse is that due to loadsa orders for for my figures I spent the last two weeks dashing backwards and forwards to local Post Office sending off piles of parcels all over the place and just ran out of time, but the upside is that because of all monies recieved I can now go towards new moulds for some new castings and the recasting of some older ranges ( 3 variations of Les Higgins ECW cavalry, thanks Ian, Crimean and Franco/Prussians , thanks John & Harry et al, Napoleonic heads, thanks James, Napoleon in Egypt, thanks Clive, plus some varied figures,thanks Uwe and finally the Douglas Miniatures Crimean will go into production mid Jan 2012, at long , long last), should mention that a small range of recast from originals of ECW and Crimean are now available.

Email ThisBlogThis!Share to TwitterShare to FacebookShare to Pinterest
Labels: WSS

Here's the reason I've neglected the blog recently, about three weeks ago the wife of one of our wargaming group asked me to put on a surprise 50th birthday game for her husband so after a discussion with another leading light from the group ( Dafydd, he who bit me on the shoulder after Borodino game some years back, see Harry Pearson's book " Achtung Schweinhund"for details !!) we decided to not use Gareth's collection but to refight Blenhiem using my forces based on the scenario in the Fire & Fury variation "Age of Honor Lace Wars"

When I checked what troops I had available found that I had enough infantry, artillery and commanders but was over 200 cavalry figures short !! hence a painting blitz with a fast closing deadline, ran short of horses so had to cast up a fair few, also used some 30 YW horses with Irregular Miniatures WSS wagon drivers as Prussian Liebregiment Dragoons just to make a change from my Les Higgins Marlburian figures, my Cuirassiers in lobster pot helmet on 30YW horses looked good as Austrian cuirassiers, to cut a long story short by 15.30 hours on the Wednesday before the Friday night set up I attached the last rider to his horse, now all I had to do was do the labels for each unit and pack the boys to transporting.

So on the Friday evening three of us sneaked into G's home (he has a large war-room attached to main house in an old barn)after his wife had taken him out for the evening, she lent me a key for entry, the other lads set up the terrain while I laid out the troops, we had a 4 hour window to complete the task and make our getaway, only took a couple of hours as we went like hell, left the place as silently as we entered, no clue was left.

On the Saturday at 9.00 hours 8 of us turned up and G's face was a picture when he saw the lay-out, played until 17.00 hours, couldn't finish the game unfortunately but we all had a great time, fight went to and fro, quite bloody at times, catering was superb in particular the homemade Victoria sponge (mouth watering)

Apart from the above painting deadline I've also been getting out Xmas orders for my ranges of figures, appears that lots of wives/girlfriends are buying figures for their fellers this year, only trouble is that some of them have increased their orders just when I'm about to despatch, I'm not complaining mind!! as monies recieved will go towards new masters and moulds

pics of Blenhiem game will appear soon when I find the camera!! Now back to sending off orders
Posted by old john at 00:10 2 comments: