Boy!! Did I Get Creamed 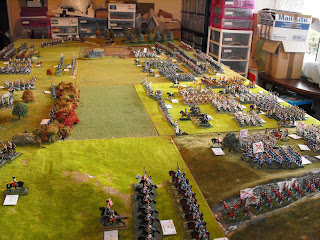 Initial set-up, on right Spanish, then Austrians, then French 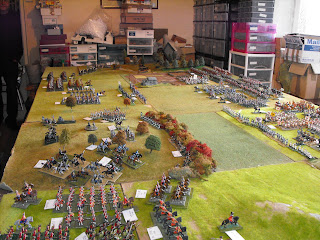 British bottom of pic, then the prussians 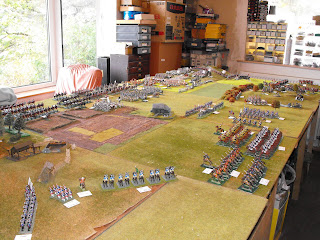 following two pics are of a small WSS Scots unit that Iain presented me with prior to the game, the word bribery was not mentioned !! 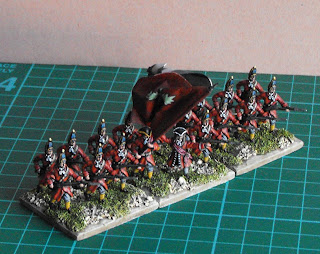 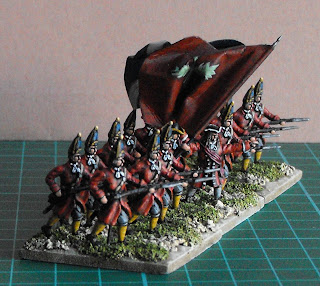 Since my last posting I've been preparing the SYW game for Iain's visit last week-end and what a scrap it turned out to be, Iain chose the Prussians and British (in hindsight right choice) I commanded the Austrians, French and Spanish, we used Age of Honor rules, a Fire & Fury variation, I launced everything at him with the result of getting blown away ,literally, by devastating Prussian volley fire, Spanish cavalry got flattened by British cavalry, Prussian Hussar brigade did sterling work by routing a very large brigade of Irish in Spanish service, captured four guns until they got clobbered by Austrian artillery( Spanish infantry fire was absymal even with enfilade fire). On my right wing French cavalry advanced across rough terrain to be met by Prussian Cuirassiers and Dragoons, several charges and melees later, Prussains gained the upper hand, in the centre my heavy French cavalry pushed back several Prussian infantry units until they succumbed to Prussian volley fire.

I lost about fifteen (yes,15 !! ) units to Iain's 2 maybe 3 , pics were taken at various stages which I will post over next few days. 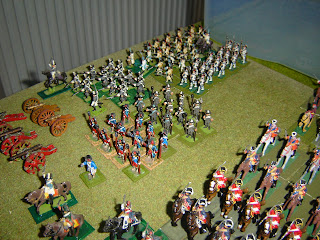 Part of SYW collection, getting them sorted for Iain's visit 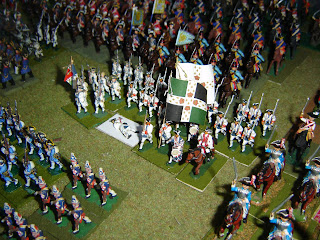 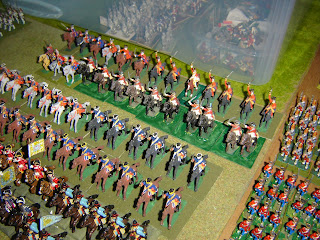 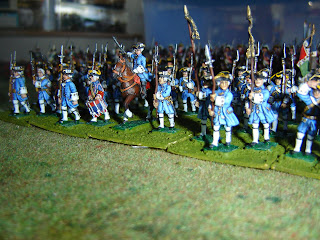 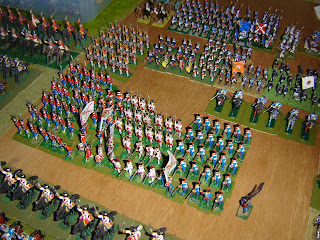 spanish and Prussians from various makers 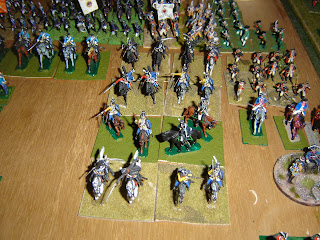 In centre Prussian Hussars by Revell 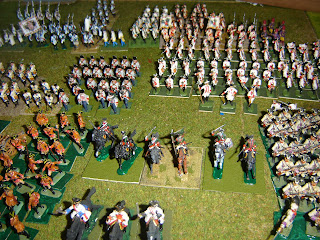 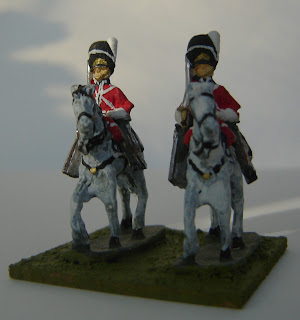 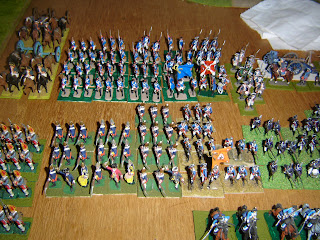 I ad a disasterous photo shoot today, took 81 pics and the above were the only ones worth keeping, mental note, must do better
Posted by old john at 07:21 3 comments:

Email ThisBlogThis!Share to TwitterShare to FacebookShare to Pinterest
Labels: SYW

I can't claim any credit for these as they belong to Iain, sculpted, painted and based by him, I just had them cast for him and supplied the officer, NCO, and standard bearers from my Wodensfeld SYW French range.

The marching figures are generic types for WAS and as Iain has done such a fantastic job I had to share. 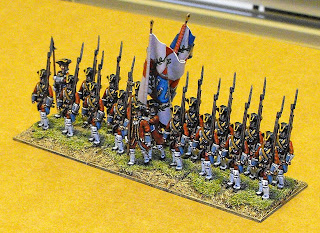 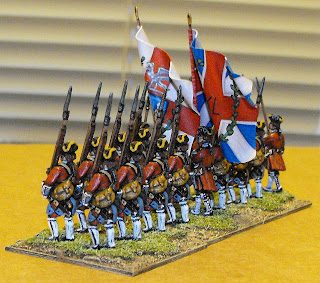 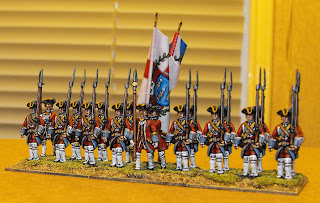 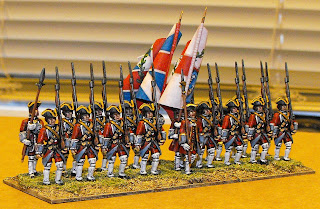 Email ThisBlogThis!Share to TwitterShare to FacebookShare to Pinterest
Labels: WAS 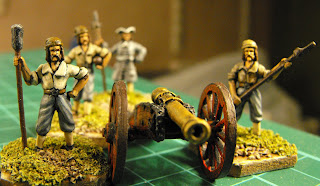 above Les Higgins gunners from the ECW range , also very handy for WSS period too 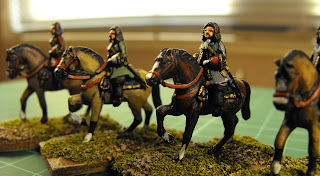 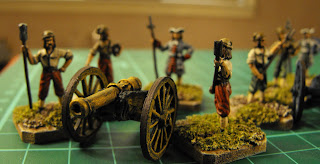 more Les Higgins gunners, all figures in my collection, painted for me by Iain

What a week-end !! Ferries to and from Holyhead to Dublin excellent, arrived at "Conrad Kinch's " home slightly earlier than expected, was dragooned immediately into cutting labels for units for Salamanca game ( Command and Colours rules) that "Conrad" was running, all figures 20 mm from various sources, as soon as we had finished off into centre of Dublin to meet the lads, several pints of Guiness well quaffed, plenty of laughs, returned to "Conrad's" where he provided me (seeing as it was damned Baltic Weather) with a South Walian hot water bottle called Mr Jones in the shape of a Welsh Dragon in red of course ( full marks for hospitality), whilst chatting before retiring for the night my lap was invaded by Captain Flashman, the Kinch's latest young cat, who has a machine gun like purr.

Saturday morning early off to venue ( not orginal venue as this was flooded out by the recent floods in Dublin), General Gorman and his committee had done a sterling job in re-arranging everything in 4 days, the new venue was superb, we set up Salamanca game just in time for the doors to open, attendance over the 2 days I was there was very good, mostly fantasy cards games , RPGS, Space Marines etc but with very little historical games but atmosphere was great.

I played 2 games of Salamanca, first game on Saturday I commanded the left wing and wiped out Swiss, Irish units and 1 french General but the Portugese on right wing let the Allies down and cost us the game, it was close fought and most enjoyable, I then played "Pulp Fiction" with dinosaurs versus shotgun wielding missionaries in Darkest Africa !! Real fun, resulting in me wiping out the raptors by getting up behind said raptors and shotgunning them up their rear ends!!

The other historical games were Three Musketeers skirmish game ( didn't get to try this one but it looked good, 28 mm), Dambusters games was brilliant, the set up was fantastic, object was for the RAF and Royal Navy subs, to destroy as much as possible of the German postions inc dam, heavy water factory, AA guns inc 88s etc, E-boats, supply vessels and so on, all this in 20 mm, Mosquitos, Lancasters and a Wellington were the RAF planes, a single German Focke-Wulf 190 was the only air oppostion but there were literally dozens of AA guns to get through, game lasted a few hours with most Germans ships sunk by RN subs, I did get my Lanc into postion to release bouncing bomb but got shot down just before I could release. German defence was excellent even though their AA guns did take a hammering.

Congrats are due to the Gaelcon organisers for getting the show to run so well in very difficult circumstances, Final note there's some great eating/drinking places in Dublin
Posted by old john at 01:33 3 comments: